The days that I run long distance are the days where I think the most. My mind goes on tangents about food, boys, to-do list items, and everything else in between. On my run yesterday I had a weird thought:

I thought back to times when I would roll my eyes at them, scoffing at their very existence. I could even remember a specific time where I pointed “that girl” out to a friend and said to her, “Like, ugh, do less.” In my mind, I promised myself I would never be that girl.

While I was caught up in deep thought, I picked up the pace a bit, periodically glancing down at my wrist, watching the heart rate on my watch increase. Beads of sweat dripped down my face, and I could feel the sun scorching the back of my shoulders.

I stood at the crosswalk, waiting for the sign to change from orange to white and I suddenly found myself feeling self conscious. I covered my stomach with my hands while looking behind me at my reflection in the shop window.

I began to notice the people driving by staring at me, continuing to turn their heads as their car accelerated away from me. A woman walked by me with 2 kids by her side and she looked at me and shook her head in disapproval.

I knew they were all thinking the thoughts that I once did. I was no longer a long distance runner. I was that girl.

Who is “that girl?” Well, apparently it’s me. 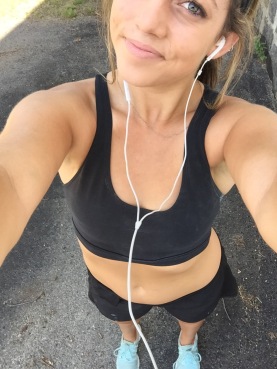 I’M THE B*TCH WHO RUNS OUTSIDE IN A SPORTS BRA.

I was never really sure about why I used to hate girls like me, perhaps it was their flawless six pack that I was envious of or maybe it was because I thought their choice of workout attire came off as pretentious. But, somehow, I have transformed into one of “those girls.”

I’m not the girl with a six pack, I have a semi-toned mid-section but it’s nothing to gawk over. In fact, my stomach is the part of my body that I hate the most. There are days I feel confident enough to go outside shirtless, and there are some days where I would never even consider it. I don’t wear a sports bra because I think I’m hotter than you, or because I want you to stare.

I WEAR A SPORTS BRA BECAUSE I WANT TO WEAR A FREAKING SPORTS BRA.

Life is full of double standards that will probably never go away, one of them being how it is far more socially acceptable for men to run shirtless than it is for women to do the same. It’s important to acknowledge the progressive shifts that have taken place recently, such as increasing media attention on the transgender community and the legal acceptance of love in all different forms. However, campaigns such as  #FreeTheNipple, or in my case,  #FreeTheWomensNakedStomach haven’t quite taken off yet.

I didn’t think about this at the time, but when I was scoffing at women like me, I was essentially body shaming them. Somehow, I had allowed my mind to say “No, it’s not OK that you’re running topless,” even though I didn’t think twice about seeing the entire UMass male track team run shirtless on a daily basis (ok, maybe their male thighs made me a little bit uncomfortable, but whatever).

I told my friend that these women should “do less,” but what exactly should they be doing less of? Being confident enough to show their naked bodies in a world full of body critics?

We live in a world where we blame the male gaze, but perhaps it’s the female gaze that we need to worry about. Perhaps the female race is destroying each other without even knowing we are capable to destruction.

We preach body acceptance, but oftentimes we forget that the “body” in its most natural form is bare-naked skin. I’m not asking you to feel comfortable walking outside nipples out (although, socially, it should be acceptable), I’m asking you to contribute to the movement towards decriminalizing the female body, in all forms.

I’M ASKING YOU TO STOP HATING ME FOR WEARING A SPORTS BRA IN PUBLIC.

3 thoughts on “I used to hate girls like me…but why?”