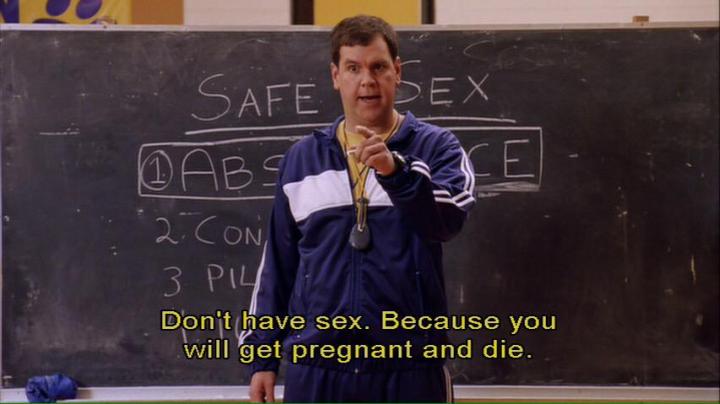 We all remember our first introduction to “sex ed” in middle school. You probably watched a video, showing diagrams and words that made you giggle. Boys and girls were instructed to separate into different rooms, where you were preached the same type of ideas. If you didn’t know how babies were made prior to this, than I’m sorry that this was your first experience with it. We then progressed to health education somewhere around the 7th/8th grade where we talked about what foods to nourish our bodies with, the importance of exercise, and maybe your teacher even lightly mentioned the topic of relationships.

For me, health and sex ed ended after the 9th grade. It ended after we talked about sexual harassment in the workplace, maybe followed by a brief conversation about preventing teen pregnancy. It ended before I even began to understand the deeper meaning behind any of it.

It ended before we had to worry about getting rushed to the hospital for alcohol poisoning, before our judgement was clouded by drunken decisions, before we allowed ourselves to trust random college bros at a party to understand the word “no.” It ended before any of these issues began to surface. But, the problem is, we never even talked about them.

We never talked about the word “rape.” We never talked about the signs of an abusive relationship, or even how to get out of one. “Anorexia” was a vocab word in our textbook but it never became more of an issue outside of memorizing it on a flashcard. We talked about condoms, but never about what to do if it breaks or how to find the courage to insist on using one despite the hot college guy who is trying to convince you otherwise. Alcohol was “against the law,” and the word translated to “automatic suspension,” but it was never connoted to the greater issues that come out of a black-out night. We were told to not get pregnant, but what happens if you do? What are the options?

Instead we were given handouts that had juvenile pictures of penises and vaginas all over them, ones that usually just ended up in the trash bin immediately after class got out. I would sit there doodling on my notebook, paying no attention to my awkward 45 year old male teacher who was preaching things that simply weren’t relevant to me at the time.

The class was anything but engaging, but I’d like to argue that health education should be the most engaging of them all.

High school students won’t remember the 45 minute one-time lecture on healthy relationships. If that was the case, perhaps I wouldn’t have invested myself in such an emotionally scarring relationship the first month of college (read about that HERE). I didn’t understand what an abusive relationship was beyond blood and bruises. All I understood was that this guy was giving me so much attention, but it turned into a nightmare that I couldn’t escape. It’s unfair to place blame on anyone for my decision, but perhaps it could have been prevented if it had been made more of an issue.

We should be talking about the depths and complexities of an abusive relationship, because oftentimes they are much more than blood and bruises. Safe sex doesn’t simply mean wearing a condom. It means consent, it means having the power to say “no,” it means feeling completely comfortable with who your with. Drugs are against the law, but that’s not all they are. How about we stop attempting to drill the word “illegal,” into student’s minds and start educating about the dangers? I’m not asking to discuss the proper dosage of MDMA, but maybe start discussing how easily it can be made into a drug that can kill by simply Googling the recipe. Why aren’t we talking about the complicated aspects of eating disorders? Why are the complexities completely eliminated and limited to how the glossary defines “anorexia” and “bulimia?”

Alcohol means “no junior prom,” but is that seriously your attempt to stop students from participating? It’s what the cool kids do in high school, simply because it’s defying what teachers and police are telling them to do. Alcohol is cool, so that means blacking out is cool too. That means drunk driving is fun, it’s risky, it’s what all the cool kids are doing. Blacking out shouldn’t simply translate to “no junior prom,” it should be much more than that, especially at the age of experimentation. If she had known not to chug a bottle of UV blue, maybe she would have remembered losing her virginity to the senior that paid no mind to her in the hallway the next morning.

It’s time to start talking about slut shaming, drunk sex, shitty vodka, emotionally abusive relationships, and how to deal with a cold hearted bitch who is trying to ruin your life. It’s time to talk about the real dangers of drugs, how consent isn’t just defined by screaming the word “no” in his face. It’s time to extend health education past the 9th grade, and perhaps consider making it a mandatory requirement all 4 years of high school. Ditch the handouts of penises and instead invite young 20 year olds in to talk about their experiences. Don’t just make it into an assembly, because an assembly translates to simply, “missing math class 3rd block.” It’s time to start actually speaking to students, rather than going by the text book.

I’m not asking for you to burn the sex ed textbooks, I’m asking you to stop being so afraid of touchy subjects. I’m asking you to make students feel something. There are so many issues in our society that have to do with health and sexual education, but oftentimes we don’t really understand them until we find ourselves in the middle of them. Stop making these touchy subjects such as sex, drugs, and alcohol something to fear and start making them into an engaging topic of conversation. I understand that there are certain restrictions as to what can be discussed in the public school setting, but maybe it’s time to reconsider what we are really teaching these students.

To anyone in high school who reads this: You might think you know it all. I did. You might think that he really loves you, or maybe if you have sex with them that he’ll be your boyfriend. But don’t define yourself based on your sexual experiences. As for alcohol, chugging it out of a plastic water bottle is considered a rite of passage into rebellion. However, don’t let partying get the best of you. You won’t remember (maybe literally) that high school party you went to that one Saturday night, but you will forever hold on to the regret of getting into the car drunk with a friend. We are all probably going to have that one shitty relationship, but please, understand your worth. Understand that you are much more than how he makes you feel. He doesn’t have to hit you for you to be in an “abusive relationship.” I can’t give much advice on drugs since I don’t much experience in that category, but I can tell you that you will receive multiple emails about drug related deaths when you get to college.

I still drink cheap vodka, and sometimes too much of it. I still expect the best out of shitty boys only to be let down. I don’t have my life figured out yet, but I guess I never really understood the value of health and sex ed until now. I don’t know if I can do much to change it, but I hope the conversation develops more beyond a simple blog post. I hope a health educator out somewhere out there reads this and takes my words as something to consider.

Talk to your students about getting into an Uber alone the night after one too many shots at the bar. Warn them about the dangers of entering into a relationship with someone who controls what you eat and what you wear. Ask them about pornography, and whether or not they understand the concept of objectifying men and/or women. Sexual harassment in the workplace is relevant, but what if he/she thinks that they have fallen in love with the perpetrator? And is it still considered sexual harassment in a different setting if she’s wearing a short dress at the bar?

Students will drink alcohol, perhaps too much of it. They will wear short skirts and crop tops. They will get labeled as a “slut,” and a “whore.” They’ll skip meals to look good for spring break, and perhaps make a dangerous habit out of it. Drugs are easily accessible, and they probably won’t get caught doing them. They may have to take Plan B the next morning, or even forget they had sex at all. These are all real issues your students will probably face if they haven’t already. Stop just attempting to prevent them and start educating. Make health and sex ed more than memorizing flash cards and handouts that end up in the trash bin. These issues shouldn’t be taught in the same way we are taught “how to solve x.”

We should stop preaching abstinence and start preaching healthy behaviors.